Watch the video to find out more –

Below, is a fascinating video of the AFWL model casting released yesterday on the Africa Fashion Week London YouTube channel.  Take a look and don’t forget to book your tickets for the hottest event in town.

Tickets can be purchased here. 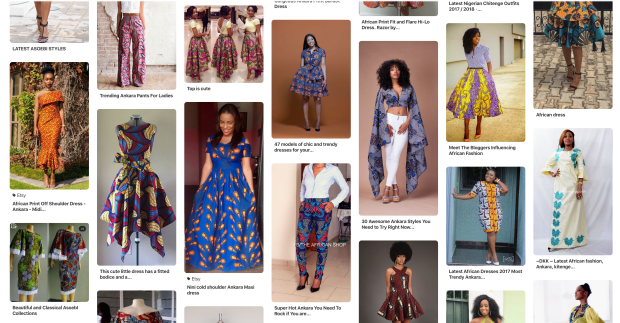 This collection of 100s of photographs has been especially collated for this year’s show, with more added each day.  With a wealth of ideas, influences and imagery, it will surely get you in the mood to strut your stuff, ready for this Summer’s event.

So why not visit the AFWL board and maybe share some of your own fashion images too. 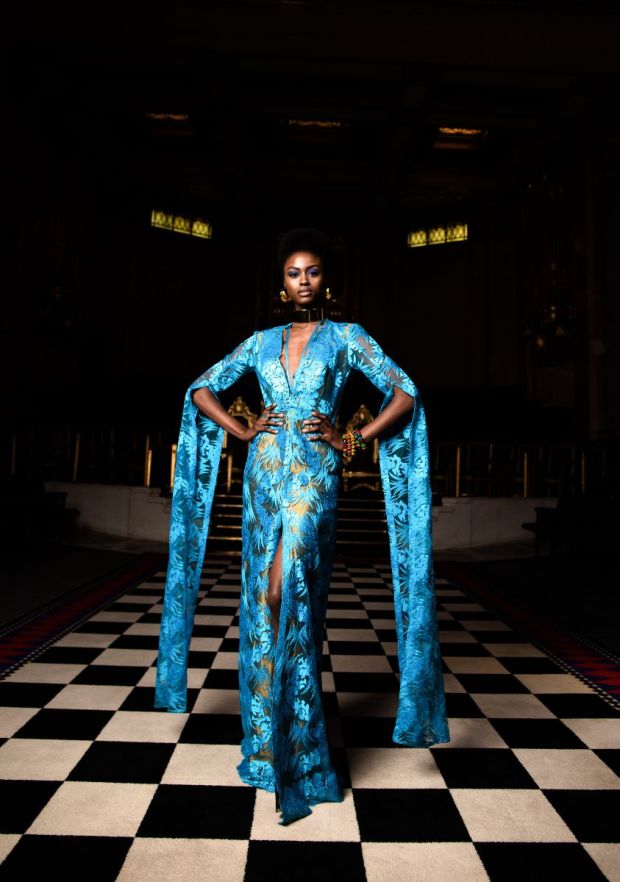 If you love fashion, then clear your designer diaries for Africa Fashion Week London, August 9-10, 2019.

Doors open from 1pm for Exhibition browsing and entertainment 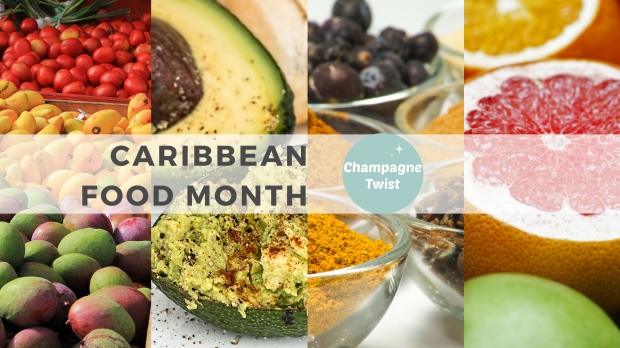 If you love Jerk Chicken, Curried Goat or Rice and Peas, the Caribbean Food Week Festival was a celebration of these 3 dishes, but if you wanted to learn about authentic Caribbean Cuisine, the menu was disappointing. 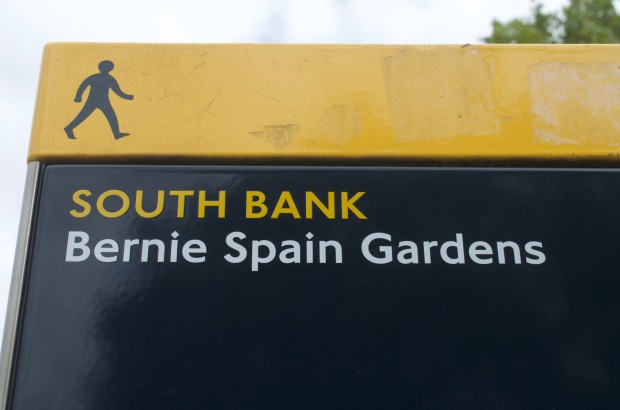 The Bernie Spain Gardens on the South Bank of the River Thames hosted the 2-day weekend food festival, just ahead of the London Carnival. Sadly, the opportunity to showcase the regions vast cuisines was missed and gave a poor overall impression of Caribbean Food.

In the age of plant-based diets, I was extremely disappointed not to see much of the fresh fruit and vegetables the Caribbean has to offer. Worse of all, the event was billed as a colourful celebration of Caribbean food, yet the main colours showcased, green, black and yellow, were that of the Jamaican flag. 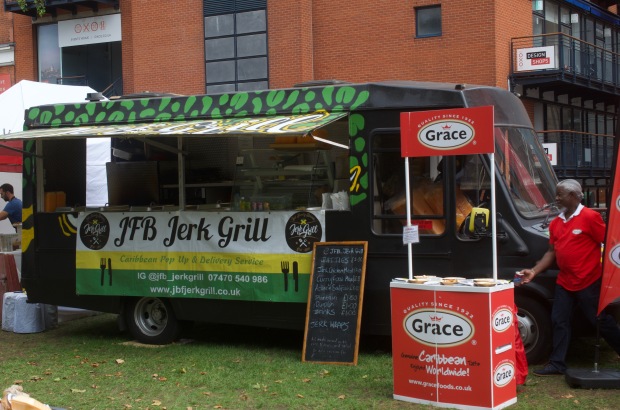 It is now clear to me why so many people in the UK believe that Jamaica is the Caribbean and the Caribbean is Jamaica. The confusion is not helped when only 3 dishes from 1 island seemed to be ‘celebrated’, and the opportunity to sell fresh Caribbean fruit and veg was missed.

Officials from the Voice newspaper stall gave away an African and Caribbean restaurant guide, which was a great idea. I was also given a bag of free literature, including a newspaper from June and a magazine celebrating African heritage from October 2016. A two-year old magazine which didn’t even reference Caribbean food. I was also informed that they had run out of literature to give to patrons, shocking as the show started at 11am and before noon, they had run out. This hardly gave a positive impression. 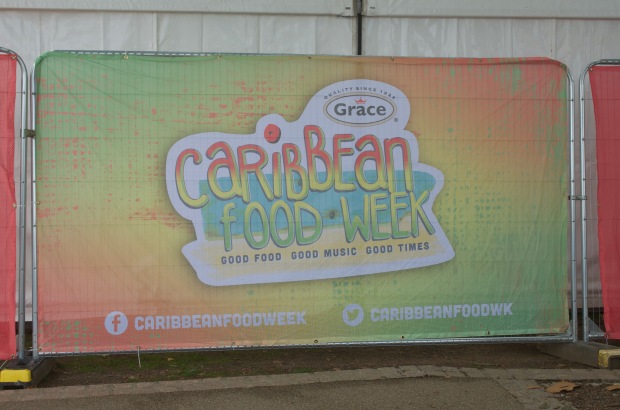 Reading the phrase “Caribbean food’, I had expected examples of cuisine from each or at least the majority of the countries within the Caribbean. So when 95% of the available food was Jamaican based, of which 80% consisted of Jerk chicken, Curry goat and Rice and Peas, it did nothing to counteract the image of Caribbean food being limited. 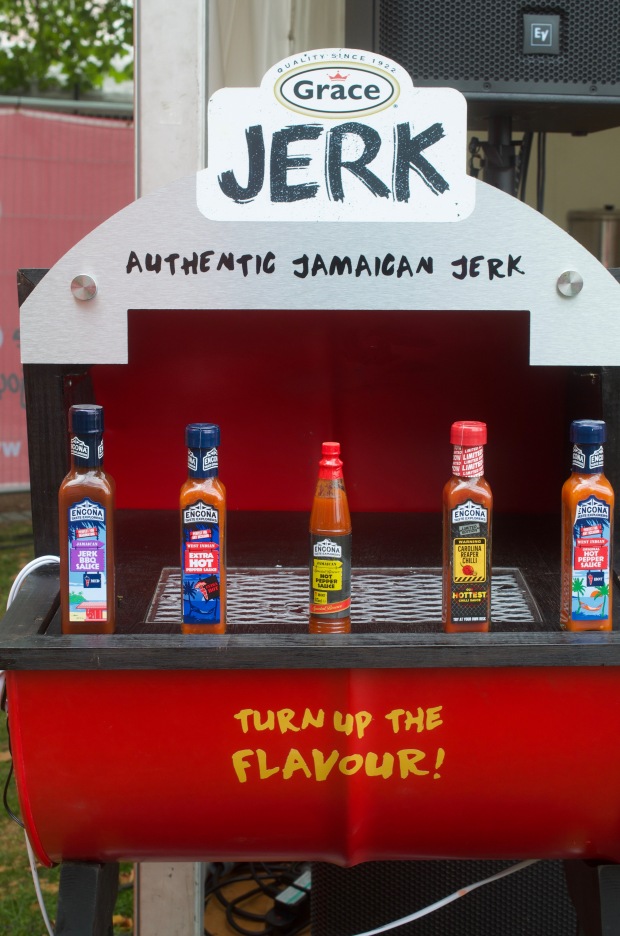 There seems to be a sense of ‘protectionism’ over this cuisine, while understandable due to the historical exploitation of the region, the time has come for the Caribbean to promote its own food in an age when Western cultures are crying out for organic, pure food and drinks. Gone are the days when sugar was the cash crop. Coconut is now the superfood of choice, yet the majority of coconut products, despite the abundance, doesn’t come from the Caribbean.

I have often wondered, with its huge variety, and abundant fruit and vegetables, unique meat and world famous seafood, why Caribbean food isn’t that well known in the UK. This event goes some way to answering that question.

Referencing a tiny selection of Jamaican cuisine as representative of Caribbean cuisine not only limits people expectations of Jamaica food, it limits and potentially damages the reputation of all the countries within the region.

For vegetarians, it was almost impossible to find anything suitable to eat.  I ended up with a dish consisting of Halloumi, fries and jerk sauce.  While it was lovely, it was hardly a showcase of Caribbean food, especially when only 1 element of the dish, the jerk sauce, could be attributed to the region.  Good luck to you if you’re a vegan! There were tofu sausages available on one stall, but not all vegetarians or vegans like or eat tofu. 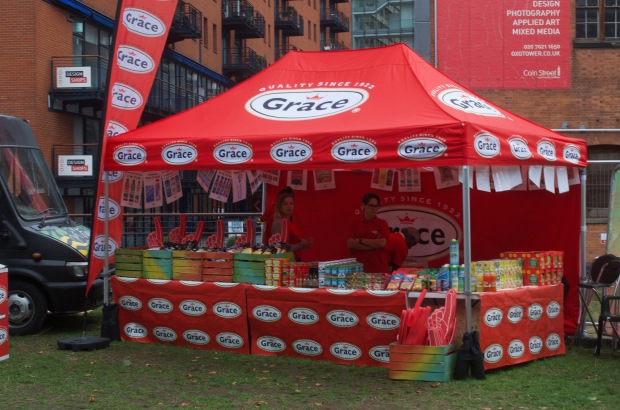 I also hoped to listen to experts discussing Caribbean food and drink in relation to health, particularly in the wake of Dr Karin’s speech remarking the coconut oil is ‘pure poison’.  Although, I was pleased that Grace Foods, the event’s hosts had provided a number of recipe leaflets, which included drinks and some plant-based recipes.

The cooking demonstrations were also interesting and proved to be the highlight of the festival, but again more should and could have been made of this. Over the weekend there are 2 different chefs, I attended the last day so was treated to 3 of the 4 live demos lead by Chef Solomon Smith. Unfortunately, the demos were meat or fish based and not vegetarian recipes. Samples were plentiful, but none were solely plant-based, which limited the number of people who could enjoy the samples. 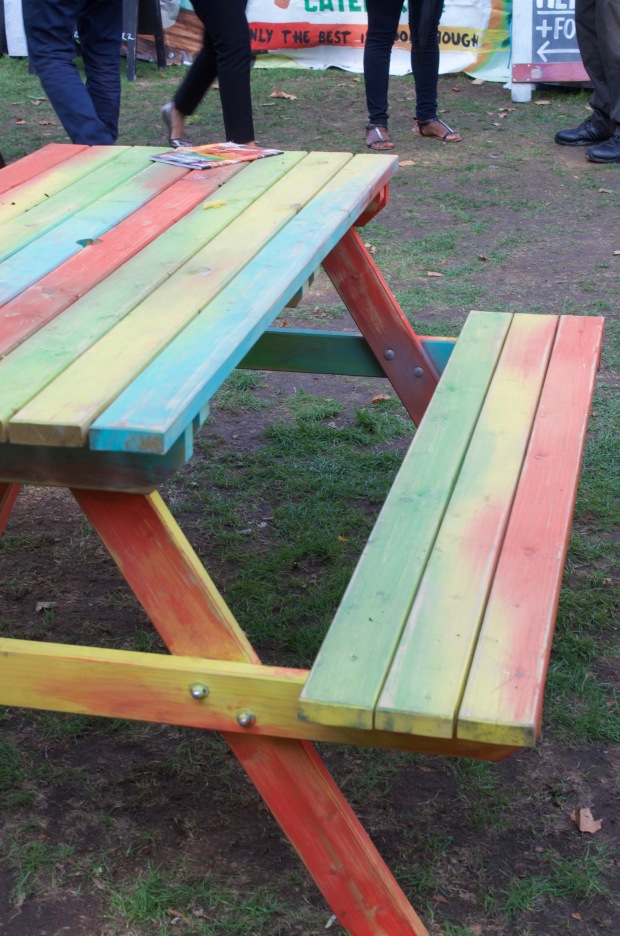 The 3 picnic benches were beautifully painted, to encourage people to actually sit down and eat, but more benches should have been provided. A few large parasols wouldn’t have gone amiss, providing shade from the sun, or the rain, yet still keeping visitors in the area and providing relatively low-cost advertising. 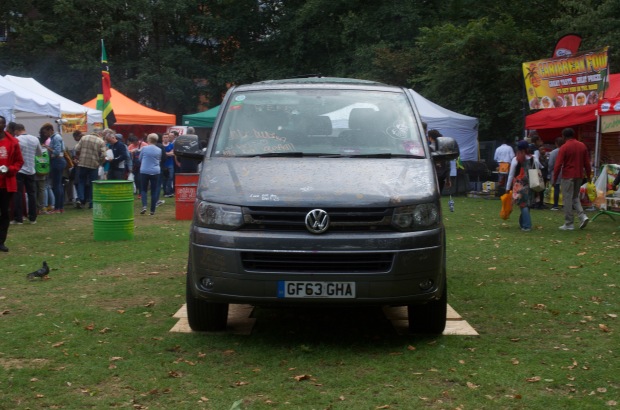 In the middle of the space was a large grey vehicle, which many thought was a delivery van. Naturally many thought it should have been moved prior to the start of the festival.  As it turns out, the van was there to help promote the Brixton Soup Kitchen, a charity which feeds and assists homeless people in the area. I am curious as to why there was no signage, or anyone standing by the van to explain the vehicle or the charity.  It was only when I attended the cooking demos, that the situation was made somewhat clearer. More of this in a later post. 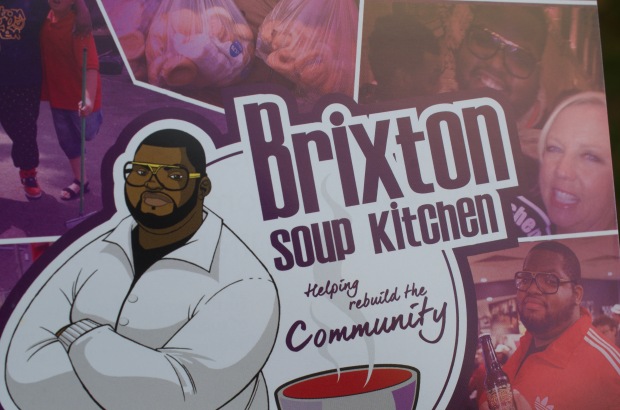 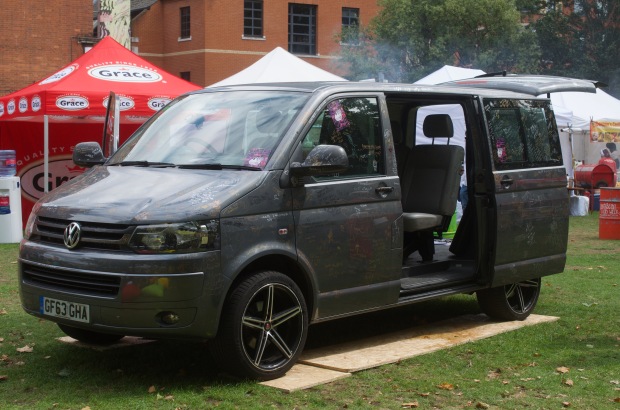 Travel companies missed a trick by not taking advantage of holiday seekers. There was one stall for people wishing to purchase or hire overseas property, but only for Jamaica, yet again, limiting choice.

The festival is now in its 3rd year, so still in its infancy. Previously held in Brixton, the move to the Bernie Spain Gardens was a stroke of genius, as the location is more central, making it more accessible for patrons, and taking advantage of a beautiful wide open space, flanked by the Thames, and a beautiful floral oasis, with multicultural art galleries, restaurants and shopping in the form of the OXO Tower and the Gabriel’s Wharf.

It usually takes at least 5 years or so for such events to become established, so I still have high hopes. A little fine tuning supported by the services from a good PR company, actively promoting all or least as many of the countries within the Caribbean, more emphasis on fresh produce, and celebrating the health benefits of the product, the festival could the late summer fixture, and the essential prelude to the Notting Hill Carnival.

Heck, all they need to bring on the colour is a flag display from all the countries in the region and maybe a few poster maps, establish a few fun and educational games (other than just a big Connect 4 and a few bean bags) for the kids, some fresh produce stalls and you have a true celebratory family-oriented festival. More live music wouldn’t go amiss, the obligatory steel pan band imagery is getting a little stale. 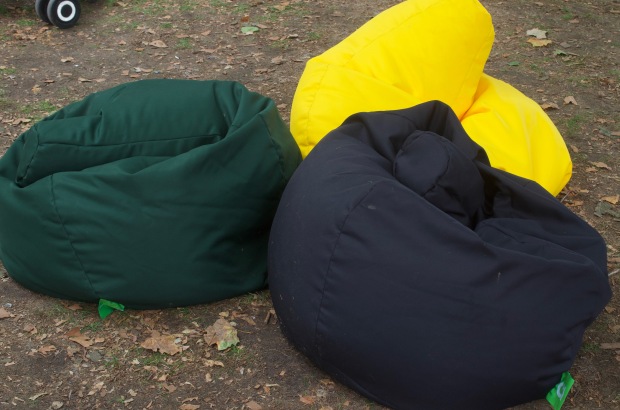 In fairness, for a free event, it’s not bad and such food festivals should be encouraged. There are a number of fundamental changes that need to be made over the next 2 years, if the festival has any chance of creating a movement that sustains and actively promotes the food of the Caribbean. Granted, the organiser of the festival is a Jamaican based company, so naturally, they are going to promote their country of origin. But that should not be at the near total expense of the other Caribbean countries, especially when the festival is called ‘Caribbean Food’. If they continue down this path, they are just shooting themselves in the foot and risk bringing down the entire region with them.

There is more to the Caribbean than Jamaica and Jerk seasoning, it’s about time people were made aware. 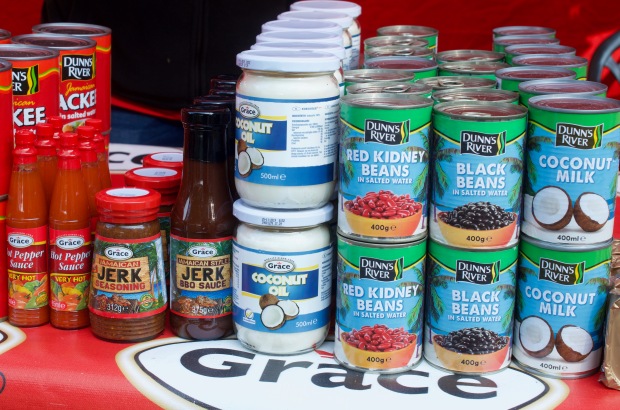 With 4 shows under 1 roof, Olympia is the place to be if you’re a foodie.

Last year I felt overwhelmed by the vast number of stalls, the bags of free food, the number of talks and demos.  So this year I planned ahead.  I downloaded the show map, exhibitor list, and timetables yesterday, studied which talks I wanted to attend and the quickest routes to take to get from 1 talk to another.

Friday, I’m guessing, is the least busiest day, due to work and school commitments,  and major events such as Wimbledon, Grand Prix, World Cup and Hampton Court Palace Flower Show.  Plus, with this unusually prolonged summer heat wave, where we actually have sunshine and the associated hosepipe bans to contend with, who wants to be cooped up in a huge building contending with massive crowds?

I also noticed this year that more people have followed my lead and brought their trolleys, suitcases and wheelie bags. I’m such a trend setter! 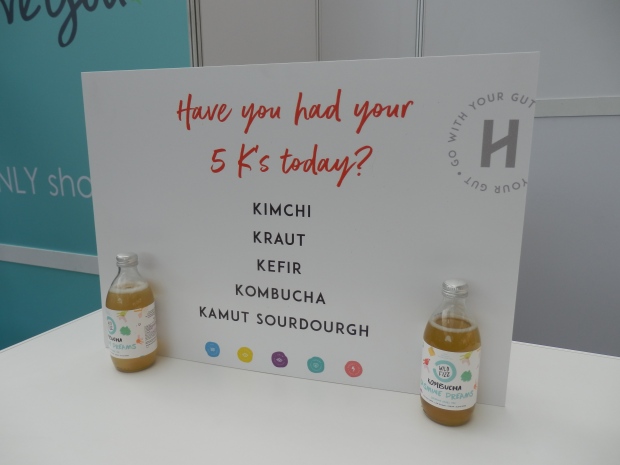 Personally, I find it funny that I have attended a health show and purchased various chocolate puddings and cakes, with plans to purchase more. But I do this for 2 important reasons – 1, to review the produce purchased and in the case Freaks of Nature puds, to stock up.

I’m going again tomorrow and on the final day of the 3-day event – which I didn’t manage to do last year, mostly because I found the whole event overwhelming.

But not this year. I have a plan! 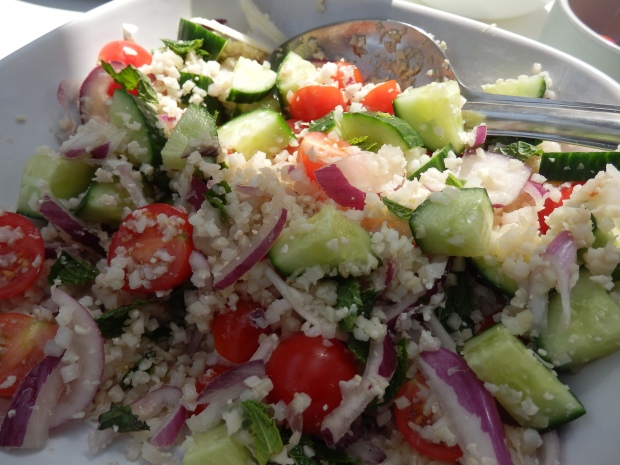 Well, what do you know? No sooner had I posted my article about the top 5 food and drink trends for 2018, it was announced that a London bakery was picked to make the wedding cake of the year. Meghan Markle and Henry Wales on the day they exchange vows, will be cutting their wedding cake flavoured with lemon and wait for it … elderflowers!

Yes, as I predicted, floral flavours are set to be one of the major food and drink trends this year. 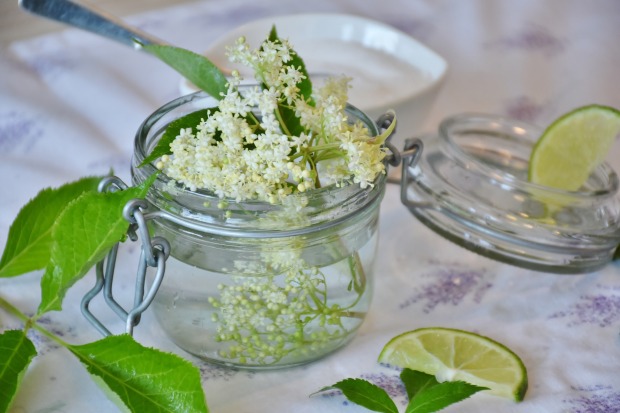 I may have to wander to Hackney and sample the baked delights Violet Bakery has to offer.  Well, someone has to make sure the cake is perfect for the Royal Wedding.

Megs and Harry, you can both thank me later. I’m still waiting for my invite, btw! 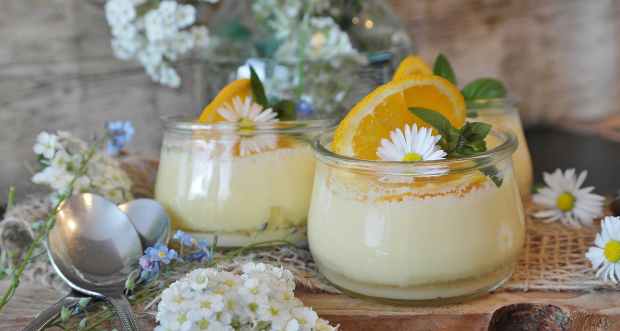 Elderflower, lavender, rose, chive blossoms, violet, hibiscus and pansy. Prepare to see these floral favourites and more, everywhere, from cakes to teas, from cocktails to salads.

The new series, Champagne Twist On Vacation: Barbados starts news week. There will be reviews, blog and vlog posts, travel guides and tips and so much more.

It all starts next week, so subscribe and make sure you don’t miss out!

There has been loads happening on the Champagne Twist YouTube Channel. Here are some of the recently posted videos – with many more to come. 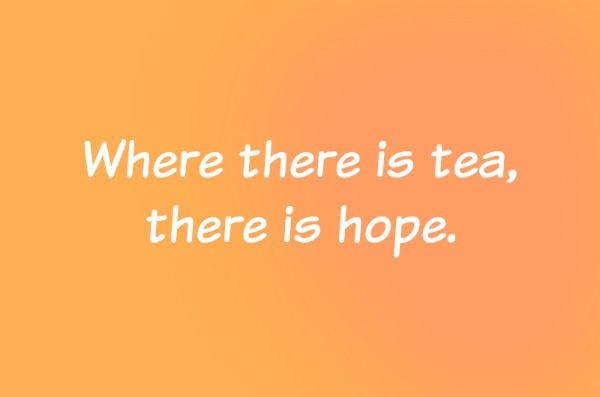